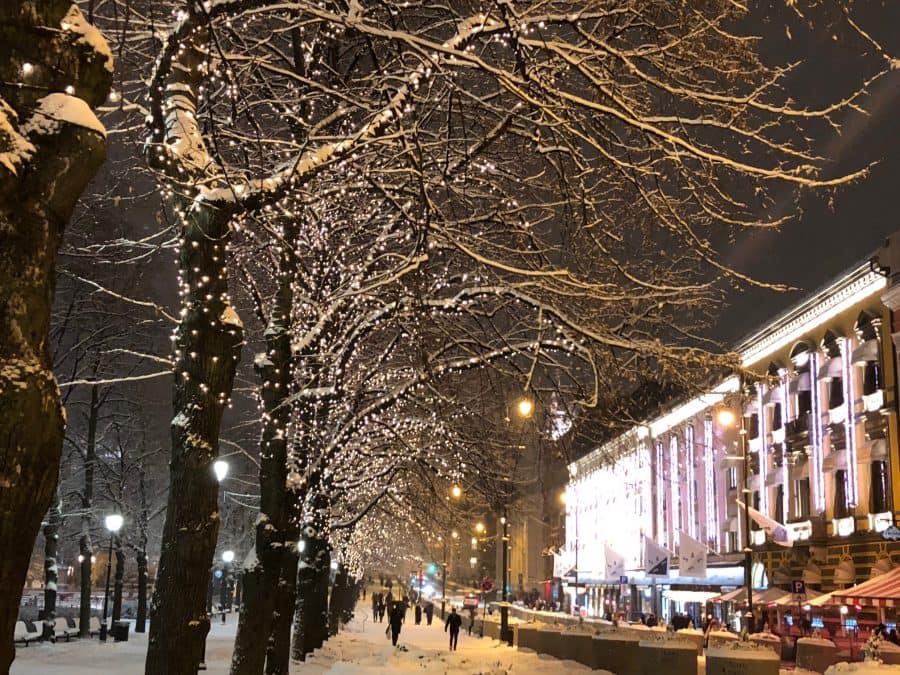 A Whistle-stop Tour of Oslo.

Over the last few years I’ve heard from friends and colleagues in the travel industry that Oslo has been undergoing some considerable growth and re-gentrification, transforming it from the city that once paled in comparison to its neighbouring capitals, Stockholm and Copenhagen, to one that has just been announced as one of Lonely Planet Traveller’s Top 10 cities to visit in 2018.

Having not visited the city since circa 2001, I was delighted to be offered the opportunity to head to Oslo to represent The Florida Keys and Key West at media, trade and consumer show, Reiseliv.

In early January, I boarded one of Norwegian’s newest aircraft for my short hop across the North Sea to Norway and arrived in Oslo to winter wonderland scenes with considerably more snow than I had expected (and an almost instant realisation that my 6-inch stilettos weren’t going to cut it as my footwear of choice). Shoe dilemmas aside and excitement growing to see Oslo again, I hopped aboard the swanky FlyToGet airport express train and headed to the city centre. As with my previous travels to Scandinavia, I was pleased to find transport modern, the locals super friendly and the English language spoken better than in our own country.

Heading to Reiseliv at the Telenor Arena the next morning, I arrived to find a show that I guess you could call a baby World Travel Market (WTM), but with consumers mixed in. With the Norwegian market recently starting to sit as part of my remit as PR Account Manager for the Keys, and after almost 10 years in the industry, it was a challenging, but motivating experience to arrive at a show and not instantly be greeted by a sea of recognisable faces.

Unlike at WTM where I have a really full schedule of media meetings and events, at Reiseliv, it quickly became apparent that as a ‘newby’ on the Norwegian scene, with only one meeting pre-arranged with a journalist I’d connected with on email, in order to gain full value from attending the show, I would need to really ‘work the room’ and physically seek out some journalists to talk to about the Keys. This is harder than it would seem since with no press room obviously available, it was quite challenging to set the media, tour operators and consumers apart. However, with a healthy dose of determination and armed with a list of top Norwegian newspapers and magazines, I set about circulating the exhibition hall and within an hour, had met with media from top publications including Reis, Reiselyst, Vagabond and Dagbladet. Being ‘in at the deep end’ actually proved to be really refreshing and the show has led to some strong new media leads for visits to the Keys in the next 12 months.

After a positive afternoon at Reiseliv, the next morning I had just a few hours remaining before my flight home and headed out from my hotel to do a mini walking tour of Oslo. Pacing out close to 10,000 steps in less than two hours in sub-zero conditions, I was able to explore the in-development harbour area of the city where the skyline is littered with tall yellow cranes that are busy creating a Canary Wharf-esque landscape to rival the famous historic waterfront area of Aker Brygge which lies just slightly further across town.

So after spending 48 hours in Oslo, is it one of the Top 10 cities to visit in 2018? Well, I loved the areas I did have time to see and would highly recommend exploring Aker Brygge and walking from the Central Station up Karl Johans gate to the Royal Palace. I certainly plan to return one day and when I do, it’ll be to take a boat trip out to the many islands that lie in the fjords south of the city and to take the train up to Holmenkollen to see the view over the city from the Olympic Stadium.