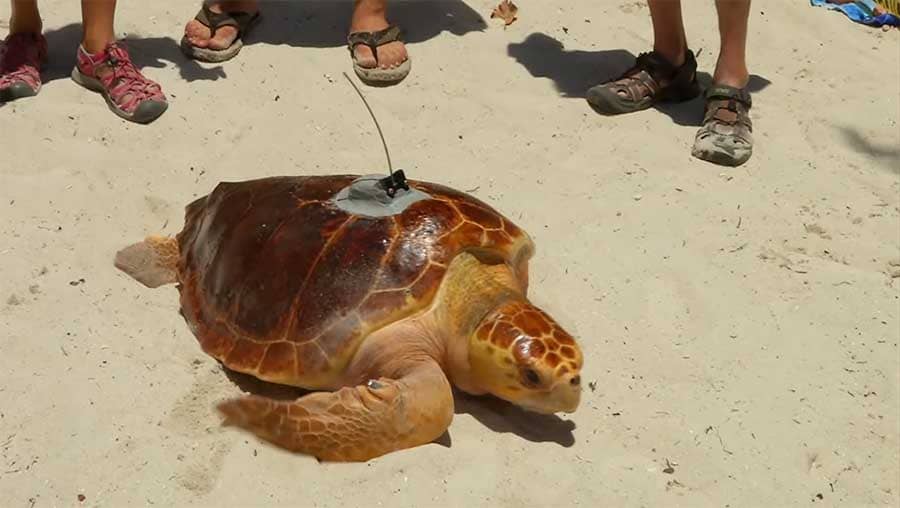 A loggerhead sea turtle, rehabilitated at the Florida Keys-based Turtle Hospital after being struck by a boat, was fitted with a satellite-tracking transmitter and released from a Florida Keys beach on Friday, 15 August 2014.

“Pine Tyme,” is the last sea turtle to join the Tour de Turtles, a three-month-long “race” that features public online monitoring (www.tourdeturtles.org) of the forward progress of 11 sea turtles. The project is organized by the Sea Turtle Conservancy.

Several hundred Florida Keys residents and visitors broke out in applause and delight after the turtle swam away from Sombrero Beach, Marathon.

Tour de Turtles follows the long-distance migration of several different species of sea turtles from their nesting beaches to foraging grounds. The turtle that covers the most distance is declared the winner.

“We get really important research information that helps us to protect and conserve habitats that these turtles are using out in the ocean. The pathways they are taking between feeding grounds and foraging areas and nesting beaches,” said Dan Evans, the conservancy’s Technology and Research Specialist. “So it provides us real critical information that we don’t get with sea turtles because most of the time with turtles we see them on a nesting beach or a rehab area.”

“Competitors” have been released off coastlines into the Atlantic Ocean as well as eastern and western Caribbean habitats.

The satellite transmitters eventually fall off of the turtles after their batteries are exhausted.

For more information on the Turtle Hospital, visit www.turtlehospital.org