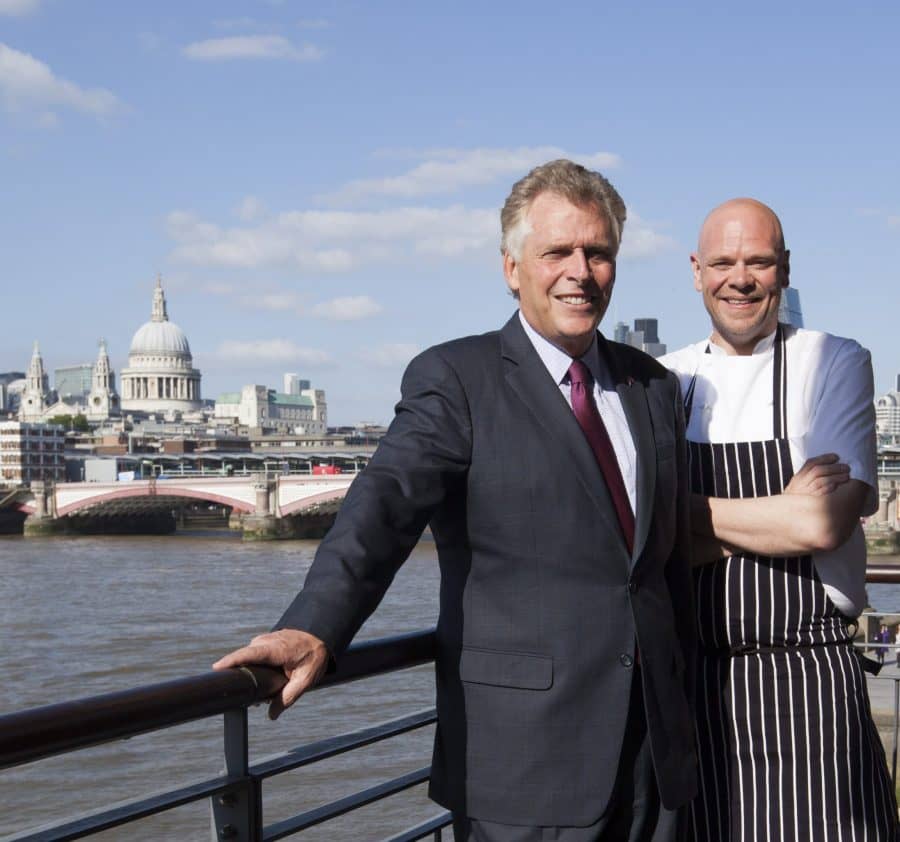 A Special Event for VTC & the Governor of Virginia…

Well, where to start in writing my first blog post for KBC…

I guess the best place is to introduce myself. I’m Beth, the newest member of the KBC team. I joined KBC back in late March from Virgin Holidays, where I spent a couple of years working in their PR Team as an Account Executive, representing their holiday destinations in the USA, Caribbean and beyond. As I’m a huge fan of America, making a move to KBC was a natural fit given the wide range of fantastic Tourist Board accounts that we look after.

When I joined KBC, I was really excited to be asked to spend the first few months as part of the team planning a special event for Virginia Tourism Corporation (VTC). This was to coincide with a trade mission that the Governor of Virginia, Terry McAuliffe, had planned for the UK and Europe in June. The aim of the event was to raise awareness of the Virginia produce available for travellers when they visit the state on holiday, all while showcasing the Virginia produce available for purchase in the UK to an audience of leading media, tour operators and trade partners.

As the PR gal on the VTC event team, I quickly got to work getting to know Jenni, Lisa and Jo Ashley (who make up KBC’s fab trade team) so that we could plan together how to carry off this large scale event, which was designed to showcase the fabulous food and drink available in Virginia and which would be catered by two Michelin-starred chef Tom Kerridge!

The first step for me was to put together a list of media who we wanted to invite to the event at OXO2 who would be interested in finding out more about Virginia and its growing reputation as a food and drink hotspot in culinary circles.

For example, did you know that Virginia has 10 different wine regions, with over 250 vineyards; over 100 craft breweries, a burgeoning cider market, and seven types of Oysters, all from the Chesapeake Bay? If you love food, a trip stateside to Virginia should definitely be on your bucket list! And now after letting my passion for the USA escape (I try to contain it when I can!), I’ll get back to talking about planning the event!

With our media wish list in place, we set about designing an invite to issue to our friends in the press to let them know to save the date. After all, when Tom Kerridge is cooking, where else would you be!

As the RSVPs started to flood in, we worked hard on logistics for the night – Jenni on making sure the food and drink arrangements came together, Jo A on designing the recipe booklet giveaway and menu blackboards for the night, Lisa on making sure all the bits of the puzzle fitted together, and me on following up with media, and planning interview slots for the Governor for the afternoon before the event.

After months of hard work, we reached the big day, 10 June 2015, and it was all hands on deck to get the venue set up. Lisa, Jenni, Kate, Hazel and Lynn all working hard at OXO2 to get the venue looking perfect for the evening, while I was busy running around London, escorting the Governor to various interviews with print, online and broadcast media. Our first stop was at Markettiers4dc for a series of radio interviews. Here, we also met with Graham McKenzie from TravelMole. After that, it was onto News International to meet with The Sun’s Deputy Travel Editor, Matt Hampton, before we hot-footed it over to OXO2 to meet with Katherine Lawrey from TTG before the event began. With an entourage of 10 people, it was quite something getting the group around town in one piece, but luckily it was a huge success and we got some great interviews in the bag!

And now to the big night…

The event took place at OXO2, a trendy venue on London’s South Bank which was given a make-over so that the interior was themed to match the black, white and red heart of the ‘Virginia is for Lovers’ logo.

We were thrilled to have over 130 guests attend our Virginia event at OXO2. During the event, our guests were able to mingle around six taster stations to dine on a Virginia-inspired menu created by Tom Kerridge comprising of:

And of course, we made sure to have plenty of different tipples available for our guests to try…

As our guests mingled, many of them were able to meet Tom Kerridge – which of course was a cause of great excitement, for both them – and us! When the evening began to draw to a close, our guests were each given a gift bag containing a bottle of Barboursville 1813 Wine, Bone Doctors BBQ Sauce, a bottle of ale or cider, a red heart shaped helium ballon, a copy of the Orthophonic Joy album together with a recipe booklet featuring the menus for the dishes served by Tom plus details of where to buy the wines, ales and ciders.

All in all, it was a fabulous evening that received ‘rave reviews’ from our guests (always much appreciated!) and I loved having the chance to be part of the team who organised and hosted the event. Now what’s next…!