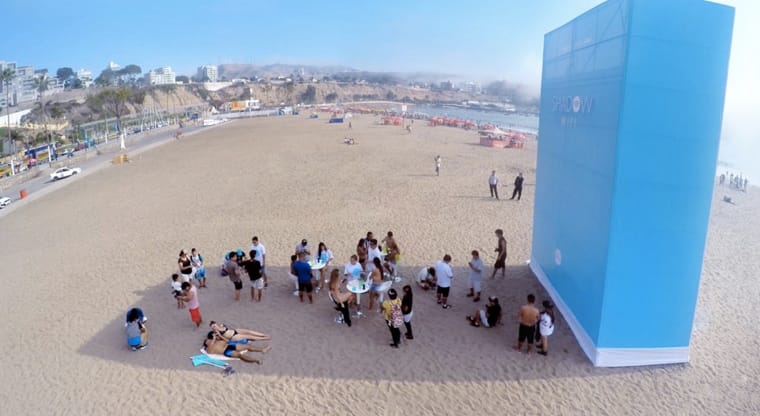 For more travel and technology news, visit springwise.com
View original article here.
If there’s one thing that people love more than the sun, its free Wifi: taking this assumption as its inspiration, Happiness Brussels, together with the Peruvian League Against Cancer has set up the first, innovative Shadow Wifi System, on Playa Agua Dulce in Peru. The large blue structure lures beach-goers out of the sun with the promise of Wifi: the network is free but it is only available in the shade, providing users with a much needed break from the sun’s potentially harmful rays and educating them about the dangers of skin cancer.

The tower emits Wifi within its shadow throughout the day. The system consists of a directional antenna and a sensor, mounted on a rotational device: as the sun moves and the system’s shadow shifts, so does the network. Before users can access the Wifi, they are taken to a landing page which contains educational reminders about the dangers of skin cancer and over exposure to the sun. Users must then complete a registration, prompting an email containing more information — such as the fact that 12pm-4pm are the most harmful hours of the day.

The system is expected to be used in San Francisco and New Zealand soon and, since access to the software has been released for non-profit use, most likely more beaches worldwide. Skin Cancer is currently the fastest growing form of cancer: how else could people be tempted out of the sun in the early afternoon?