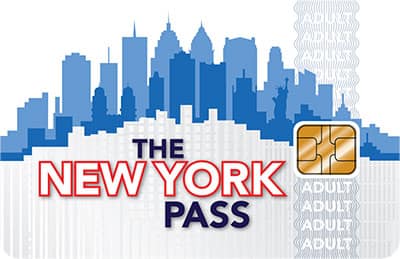 Have your photo taken with the Super Bowl trophy at the NFL Experience in Times Square, or get in tune with the city’s spiritual side on a Harlem Gospel Tour  –  in total 26 new attractions have been added across the two passes for summer 2018.

The New York Pass is the ultimate all-inclusive sightseeing pass in the city, offering admission to more than 100 top attractions, tours, museums and experiences, with fast track entry at some of the most popular sites.

With a three-day New York Pass, priced at $273 (£201) per adult, visitors will start making savings once they gain entrance to their fifth attraction.  By visiting just three attractions per day they can save more than  $200 (£147) compared with gate prices.

The New York Pass now includes eight new attractions such as the Ground Zero Museum Workshop: Hands-on 9/11 Tour, a Catacombs by Candlelight tour that takes place in the undercroft of the Basilica of St. Patrick’s Old Cathedral, and the chance to explore Governor’s Island by pedal power in a rented Surrey.  Together the three attractions mentioned would normally cost $105 (£77) at the gate.

Available for durations of one, two, three, five, seven or 10 days, the New York Pass comes complete with a free guidebook containing essential details on all featured attractions, as well as maps and tourist information.  The New York Pass can be purchased at www.newyorkpass.com.

The New York City Explorer Pass allows visitors to make savings of up to 50 percent on gate prices at more than 80 attractions in the city.  Designed for visitors with more time, the pass provides access to a specified number of attractions over a 30-day period; customers simply buy a pass valid for three, four, five, seven or 10 attractions.

An impressive 22 new attractions and tours are offered on the New York City Explorer Pass for summer 2018.  Among them are Spirits On Foot: Beer, Spirits & Wine Crawls, a walking tour visiting unique watering holes in the city, the Downtown Liberty Express Cruise in New York harbor, and an Inside Broadway Walking Tour offering unique insights into the city’s famous theater district.  Normally $29 (£22), $31 (£23) and $35 (£26) respectively, all are included on the pass with nothing further to pay.

Prices start at $89 (£66) per adult for a three-attraction New York City Explorer Pass, which also includes a guide and access to additional shopping, dining and entertainment discounts.  The pass is available for purchase at www.newyorkcityexplorerpass.com.

The New York Pass and New York City Explorer Pass offer the best choice for maximum savings and flexibility.  Both are available as a digital download, with smartphone apps allowing pass holders to simply scan their pass straight from their phone at each attraction.  New York Pass customers can also collect physical passes in the city or have them mailed in advance, while the New York City Explorer Pass can be printed at home direct from a confirmation email and then scanned at chosen attractions.