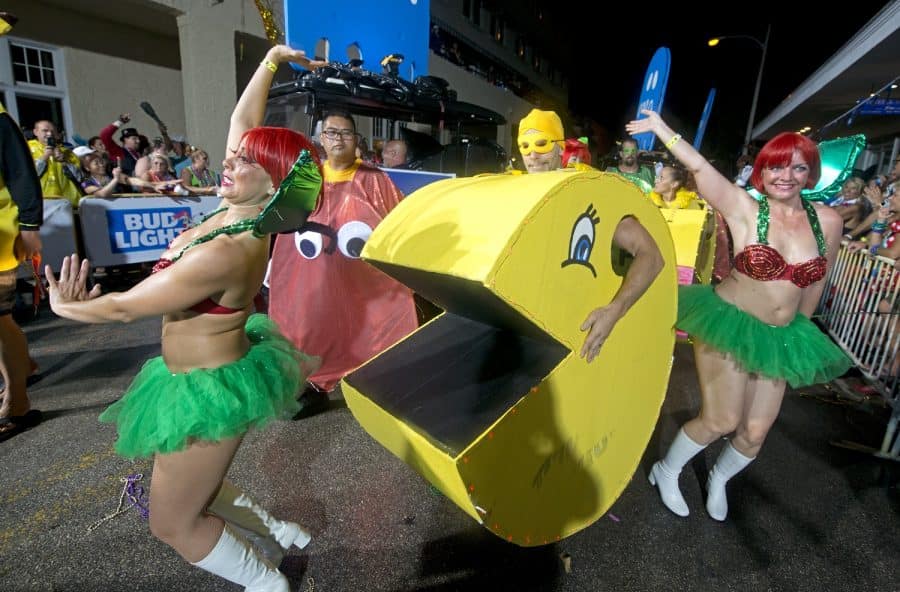 Key West’s own distinctive Mardi Gras-style spectacular, the 2018 festival is themed “Oh … The Games We Play!” and features ten days of masquerade balls, elaborate costume contests, parties and fanciful frolics, all climaxing in a grand parade set for Saturday, 27 October.

Event organisers are encouraging participants to design costumes and parade floats around the festival theme — embracing everything from old-style board games to online role-playing challenges. They might draw inspiration from suspects in Cluedo, riverboat gamblers, Bingo bimbos or quest-focused avatars from the “World of Warcraft” universe.

The glamorous gaming action is to begin with a Royal Coronation Ball on Friday, 19 October, where a king and queen are crowned to rule over the festivities. Also that weekend, the family-friendly Goombay street party takes place in historic Bahama Village, saluting Key West’s Caribbean roots.

Subsequent festival highlights include Wednesday’s wacky Pet Masquerade, where creatures ranging from dogs and cats to “angry birds” compete for costume prizes along with their human companions.

On the night of Thursday, 25 October, contestants at the 36th annual Headdress Ball will engage in a not-so-trivial pursuit: displaying huge and elaborate masks and headgear while vying for “over the top” prizes.

Throughout the festival, attendees can immerse themselves in fantasy roles at themed parties, costume competitions and other gatherings. Antics on the overflowing schedule include the Ringmaster’s Pool Party, glow galas, toga and tutu affairs, the Venetian Masquerade Ball, a retro beach bash and a Zombie Bike Ride reminiscent of the “Resident Evil” video game.

Travel to the Florida Keys for Fantasy Fest

My America Holiday (0208 290 9751, https://www.myamericaholiday.co.uk/) has six nights in the Florida Keys from £1,425 per person, including flights from London to Miami, return flight from Key West via Atlanta, three nights with breakfast in Key Largo followed by three nights in Key West and car hire for the duration. The price is based on a 20 October 2018 departure for two adults travelling, sharing room only accommodation in Key West. Entrance fees to Fantasy Fest are not included. ATOL protected.

For more information on the Florida Keys: http://fla-keys.co.uk/