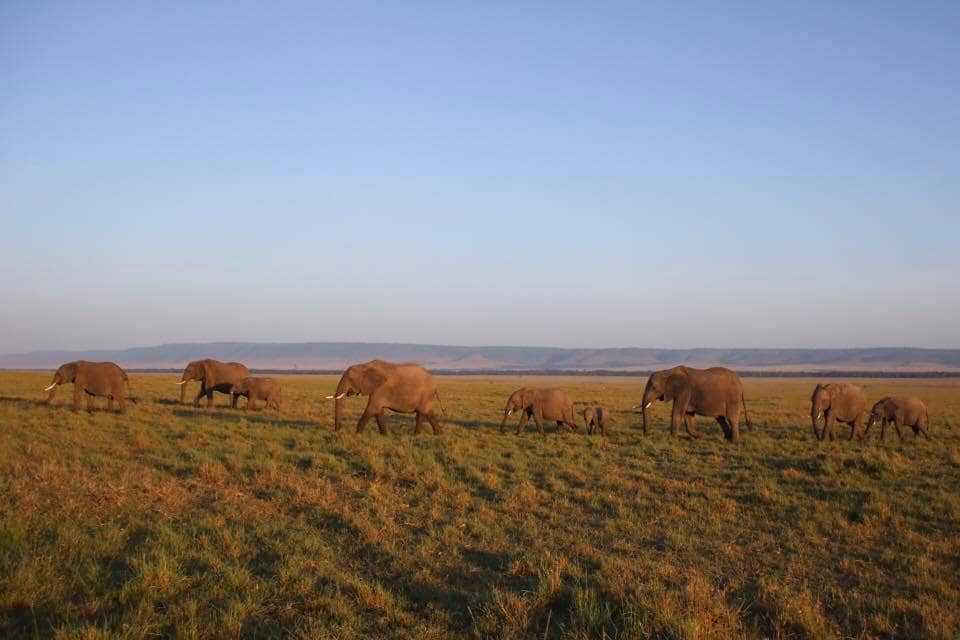 Honeymoon – Trip of a lifetime!

Over the last few years honeymoon trends have changed, with couples looking for adventure or multi destination trips to tick as many boxes as possible off their bucket list. This was my excuse to splash out and go the extra mile, experiencing something I have always dreamed of – a safari!

As a huge animal lover and a fan of African animals in particular, I have always dreamt of sharing the same space as a lion and being within touching distance of an elephant or giraffe. It was a no-brainer that the Masai Mara, Kenya, was the place to go.

I was under no illusions about how rural this would be… but one thing I hadn’t thought about was actually landing in the Mara – a low ‘go around’ to clear the animals off the strip, then a comical bounce along the ‘runway’!  A quick drive in a 4×4 and we had arrived in the heart of the bush.

We were staying at Governor’s Camp – a cluster of canvas tents lining the river bank. I took a quick look over the edge and was greeted by an enormous hippo and crocodile…. cue a rather large gulp by me whilst Andy chuckled! We settled into our tent – but with the enormous Queen size bed and a ‘proper’ shower this was certainly glamping rather than camping.

Our first stop on the itinerary was lunch on the ‘lawn’.  With a herd of elephants for company of course! My heart was doing somersaults with excitement… all these animals and we hadn’t even left camp yet!

On our first game drive – the most surreal afternoon of my life – we started off small with impala and gazelle, swiftly followed by some zebra, monkeys and baboons.  And then:  three sleeping lions! Camera in hand, I zoomed in and started snapping away feeling very much like a tourist until our driver said those magical words: “I go closer”.  Guide Zuve has 20 years in the business, can read the animals’ body language and knows when and when not to creep closer.

The next couple of days passed in a whirlwind with 5.30am wake ups, game drives, breakfasts in the bush amongst the wildebeest, afternoon siestas, more game drives, fantastic candlelit dinners, the odd hippo running across the lawn, hot water bottles in bed and guards to escort us back to our tent. What more could a girl want? Lion cubs and baby elephants of course! I feel incredibly blessed to have seen both on the subsequent drives.

There is nothing quite so awe-inspiring as seeing mother nature and the circle of life at its best.  Being mesmerised by these creatures in action – the speed, the power and the adrenaline of the chase, your heart dropping for the prey, willing him to run faster. I want to look – but I don’t want to look!

On one drive back to camp we turned a corner and came face to face with a herd of elephants so we crawled off the track to let them pass – trunk to tail, single file, with the tiniest baby elephant sandwiched in the middle. It was like something out of a Disney film. The guides’ respect for the animals and environment is admirable beyond belief. You suddenly start to feel very small!

Walking to dinner that night, torch in hand, two armed guards rushed out of the bush in a bit of a commotion ushering us down a different path, hearts pounding, torches flicking back and forth… What was going on?  Once we were at a safe distance our guard pointed his torch towards a bush and out popped a trunk. Those elephants again!  Exhilarating, slightly scary and amazing all in one go!

As our trip was drawing to a close we were lucky enough to be welcomed into the village of one of the local Masai tribes – and what a welcome it was, with their traditional song and vibrant dance.

A circle of mud huts surrounded by barbed wire and woven fences was set up around the village to protect them from the lions. I felt a strange mix of emotions and was a little confused as to how I should feel.  On one hand, the tribe’s willingness to share their lives with you and make you feel a part of their village fills you with a rush of warmth and overwhelming unity… but on the other hand I was slightly shocked at the standard of living, not really knowing what to say.

Our final day of exploring was spent wrapped in our striped Masai blankets.  Already the pangs of sadness had started at the thought of leaving later that day. We went again in search of the elusive rhino, knowing our chances were slim.  Although a male had been spotted in thick cover nearby, he eluded us again – an excuse to go back again, perhaps.

Feeling rather deflated heading back to camp, a call suddenly came in on the radio, and the truck shot towards the river:  Leopard! Another animal which had outwitted us all week. We found a shallow place to cross and there she was… one of the most breath-taking animals I had ever seen, standing proudly over her kill – what a way to finish our time in the Mara!