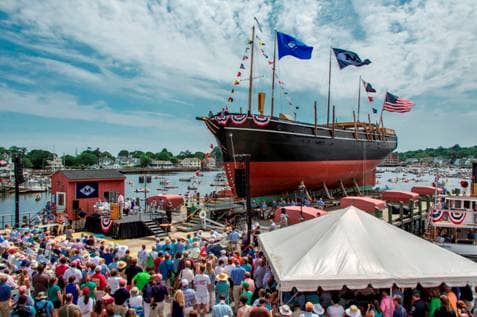 Mystic, Connecticut –  America’s oldest commercial ship, the Charles W. Morgan, was relaunched yesterday in a ceremony at Mystic Seaport, the nation’s leading maritime museum.
One of four National Historic Landmark vessels located at Mystic Seaport, the Charles W. Morgan is the last remaining wooden whaleship in the world, and re-entered the water in a public ceremony at the Museum’s shipyard on Sunday 21 July  –  the 172nd anniversary of the ship’s original launch in New Bedford, Massachusetts in 1841  –  following a five-year restoration costing nearly US$7 million.
The ship was christened by Sarah Bullard, the great-great-great granddaughter of Charles Waln Morgan, one of the original owners and the man after whom the vessel was named. Ms Bullard broke a bottle containing water gathered from the oceans upon which the ship sailed during her 80-year whaling career, including the North and South Atlantic, the Pacific and Indian Oceans. Water from New Bedford and Mystic was also included to represent her first and current homeports. Following the christening, the ship was lowered into the Mystic River in a process that took approximately 20 minutes.
Restoration will continue following the launch of this American icon in preparation for her 38th Voyage in late May 2014.  During the six-week voyage the Morgan will visit historic ports of New England, including Newport, New Bedford, and Boston, and sail over the Stellwagen Bank National Marine Sanctuary to raise awareness of the importance of America’s maritime heritage.
Stills can be downloaded from the Mystic Seaport Press page:
http://www.mysticseaport.org/connect/press/
Video footage is available at:
http://www.youtube.com/watch?v=EoICJgWzTGM&feature=youtu.be
Media Contact:
Dan McFadden
Director of Communications
Mystic Seaport
dan.mcfadden@mysticseaport.org
00 1 860 572 5317
About Mystic Seaport
Mystic Seaport is the nation’s leading maritime museum. Founded in 1929, the Museum is home to four National Historic Landmark vessels.  The Museum is located one mile south of Exit 90 off I-95 in Mystic, CT. Admission is $24 for adults and $15 for children ages 6-17. Museum members and children 5 and under are admitted free. For more information, please visit www.mysticseaport.org.