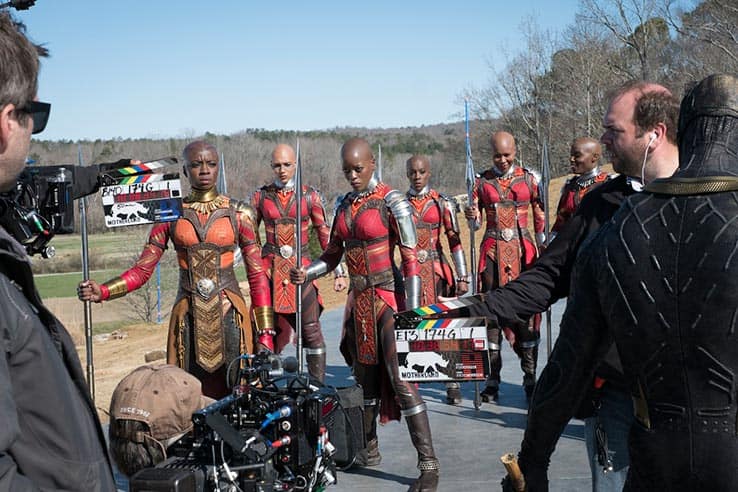 Georgia in the movies!

Georgia is a real ‘peach’ for film shoots, with many legendary movies and TV series filmed in the state. With the release of the eagerly anticipated Avengers: Endgame movie set for 25 April 2019, this blockbuster is just one of the many productions that highlights what a sought-after movie and TV destination Georgia is and the diversity of the locations it has to offer. From breathtaking beaches and iconic buildings, to Atlanta’s notorious skyline and Forrest Gump’s famous park bench, the Peach State has set the scene for countless movies and TV shows – and this is continuing to grow!

Avengers assemble for the fourth and final time in Atlanta
Since the mind-blowing cliffhanger of Avengers: Infinity War, the latest episode in the Marvel movie series has felt like a long time coming. Described as the most anticipated film of 2019, Avengers: Endgame is the fourth and final saga of the hugely successful superhero film and, like it’s predecessors, was filmed in Georgia. With a new trailer premiering during Super Bowl LIII earlier this year, the preview was a nod to the film’s key shooting location at Pinewood Atlanta Studios in Fayette County, Georgia – the country’s largest purpose built studio outside Hollywood.

What’s filming in Atlanta now?
The rumours are true! Will Smith and Martin Lawrence are back in Atlanta and have finally begun to film the third Bad Boys film. The long-awaited follow up Bad Boys for Lif3 is set to hit screens in January 2020, 25 years after the classic 90s action movie hit screens. Not the only sequel to be filmed in the capital, keep an eye out for Emma Stone and Jesse Eisenberg filming Zombieland 2 in Macon, and Kevin Hart and Dwayne ‘The Rock’ Johnson are back in Atlanta again for Jumanji 3.

Tybee Island is camera ready
Georgia is always camera ready, and no more so than seen in the action comedy update of Baywatch. Stars including Dwayne ‘The Rock’ Johnson, Zac Efron and David Hasselhoff descended on Tybee Island to film the reboot of the classic TV series. Located just 18 miles from Savannah, the stunning beach offers the perfect location for coastal film sets and can also be seen in The SpongeBob Movie: Sponge Out of Water.

The odds continue to be in Georgia’s favour…
The popular trilogy, The Hunger Games, chose to film ‘Catching Fire’ and ‘Mockingjay: Part 1 & 2’ in Georgia. Audiences may recognise the interior and exterior of Swan House, part of The Atlanta History Center, as the president’s house, and Atlanta Motor Speedway as the site of the Quarter Quell chariot parade.

The home of cult TV shows The Vampire Diaries and The Walking Dead
How about taking a trip to Mystic Falls? Covington, (as it’s known in the real world) has been the home of popular TV show, The Vampire Diaries, since it first aired in 2009. Avid TV fans might also be familiar with The Walking Dead, another cult series that has been filmed almost entirely in Georgia. Audiences might recognise the view from Jackson Street Bridge, as seen in one of the most iconic scenes from The Walking Dead. Experience some of the series’ most iconic sets and never-before-seen locations on the first-ever The Walking Dead Studio Tour, now open to the public at Riverwood Studios in Senoia.

The legend that is Forest Gump, and his Savannah park bench
Finally, it would be impossible to discuss Georgia’s legendary film and TV history without mentioning epic Academy Award winner – Forrest Gump. Chippewa Square in Savannah was home to the park bench that Tom Hanks famously sat on for the majority of the movie, and is still a popular spot for photographs – even though the original bench was a prop that has since been placed in the Savannah History Museum. Home to many, many more world-renowned movies and TV shows, is it any wonder that Georgia is fast becoming known as the new Hollywood?

GET THERE: America As You Like It offers a seven-night ‘Georgia in the Movies’ itinerary from £1,126 per person including return international flights, car hire, 3-nights Atlanta, 1-night Madison, 1-night Augusta and 2-nights Athens. Price based on two adults sharing. For more information contact 020 8742 8299, sales@americaasyoulikeit.com or visit www.americaasyoulikeit.com/georgiainthemovies

For more information the latest news, developments and events in Georgia, visit www.exploregeorgia.org