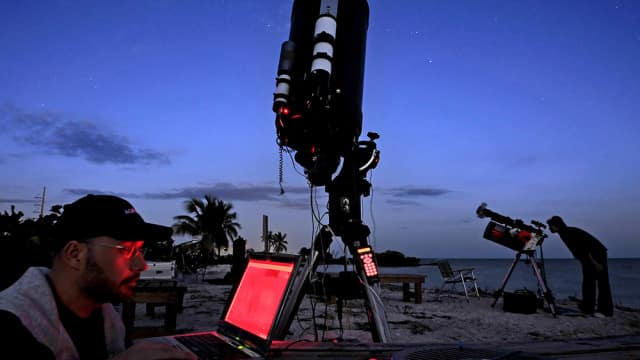 Amateur and professional astronomers can experience unparalleled viewing of southern constellations, comets and stars in the Lower Florida Keys during the 33rd annual Winter Star Party from 20-26 February.

Over 600 astronomy aficionados from around the world typically participate, attracted by the chance for warm-weather viewing of the Southern Cross and other southern constellations in clear, steady night skies. The Florida Keys are among the only places in the continental United States where those celestial objects can be seen.

Activities during the Winter Star Party include nightly stargazing sessions, photo contests and lectures and presentations by nationally recognised astronomers and guest speakers.

The gathering is hosted by Miami’s Southern Cross Astronomical Society. Founded in 1922, the SCAS is one of the oldest amateur astronomical societies in the Western Hemisphere.

The Winter Star Party is open to the public as well as to SCAS members, though advance registration is necessary for admission. Event registration is now open and entry costs $150 (around £122). Additional fees apply for site stays and space is limited.

America As You Like It (0208 742 8299 / sales@americaasyoulikeit.com / www.americaasyoulikeit.com) offers seven nights in the Florida Keys from £1,680 per person, including return Virgin Atlantic flights from London Heathrow to Miami, four nights room only in Marathon followed by three nights B&B in Key West and fully inclusive car hire for the duration. Based on two adults travelling.

To register for the event, visit: www.scas.org/wsp/registration/form.php
For further information on the Florida Keys & Key West, visit: www.fla-keys.co.uk