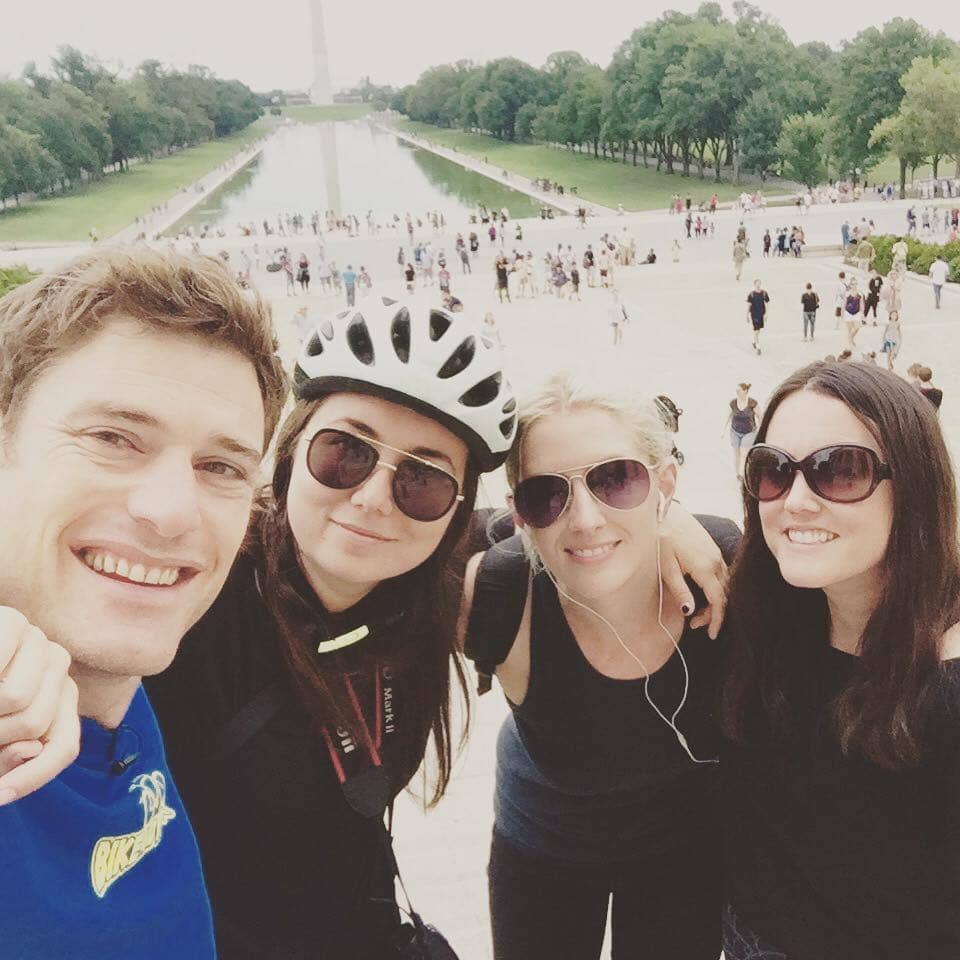 All Eyes on the Capital Region USA

The U.S. Presidential campaigns are heating up and the result of this election looks set to be one of the most anticipated in U.S. history….not just by Americans but from people all around the world watching eagerly!

With ‘All Eyes’ on Washington, DC and the election, this is the reason I was in the Capital Region USA last week on a film shoot. We were filming a series of short videos on Washington, D.C, Maryland and Virginia, showcasing all the tourism products available in the region beyond the politics.

Our adventure started in Baltimore at Union Craft Brewing where we sampled some of their amazing beers. My favourite was the Pink Flamingo; a sour ale with pink grapefruit and ginger – yum!

From Baltimore we drove 45 minutes to Annapolis, where we filmed at the U.S. Naval Academy. It was so unbelievably hot and I felt sorry for the camerawoman and all the officers in their full on uniforms. The day ended perfectly on a sunset schooner trip on the Woodwind II, the same boat used in the movie The Wedding Crashers, starring Christopher Walken, Vince Vaughn and Owen Wilson – very cool!!

Breakfast the next morning involved a ‘Man V Food’ challenge at Chick and Ruth’s. We got the presenter to try one of the famous Colossal Milkshakes, a 6lb vanilla beast! We got five straws and we all had some but we still couldn’t finish it! Challenge failed!

We were making three videos, one on culinary, one on history and one on adventure, so our next stop was Go Ape in Rockville. Turns out our presenter, Ashley House, actually worked at a Go Ape and is fully trained – needless to say he was real pro! We’d worked up an appetite after that so we went for dinner at Crisfield Seafood where we all had clam chowder and the compulsory Maryland crab cakes – delicious!

The next morning we headed to DC and we went straight to the White House to film the opening scene for the history video. It’s always so incredible to see it and you can still get quite close. For lunch we hit Franklin Square and their awesome food truck scene! There were about 20 trucks around the square all offering something completely different. The smell was incredible! Last time I was in DC I went to the Ethiopian truck as the chicken and rice was amazing. It wasn’t there this time but I wasn’t spoilt for choice and ordered a very tasty pulled pork pita.

The Willard Hotel in DC has such a fascinating history, which is why we decided to include it on our shoot. The manager showed us around and told us all the stories, including Martin Luther King staying there the night before he gave his iconic ‘I Have a Dream’ speech and Jon Bon Jovi having his 25th wedding anniversary there . He also showed us the Thomas Jefferson suite – unbelievable!

As you could probably tell, we had been eating a lot so we were all very grateful for our three and a half hour Segway tour of the monuments and memorials with Bike and Roll DC the next morning. My favourite monument is always Lincoln, every time I see him, it just really moves me.

Ben’s Chilli Bowl  is in the U Street neighbourhood of DC and is an institution that many visitors come to hunt down.  The half-smoked chilli dog is SO good that even Obama went there a few days before his inauguration. Sadly Ben is not alive anymore but we got to interview his wife, Virginia, who got us all very emotional telling us about how the restaurant hosted the Civil Rights Leaders and how it survived the riots after Martin Luther King was assassinated.

After the first three or four days of a trip, it then starts to go really fast! We were on our way to our final area of the region, Virginia – the state for Lovers! After interviewing a really fascinating guide at Monticello – Thomas Jefferson’s home – we headed to  Pippin Hill Farm and Vineyard, one of Virginia’s 280 wineries. The wine and the location were just stunning. Once we’d finished filming we decided to stay, have a glass of wine and just take in how lucky we were to be in such a beautiful part of the world. The Sauvignon Blanc – my personal favourite wine – was out of this world.

We were up early the next day to hike Shenandoah National Park with Ranger Mike – what a legend he was! He knew so much about the area and took us on a trail which offered some of the most breathaking views in this national park which, like all the others in the USA, is celebrating its centennial this year. We got excited when we saw some bear ‘scat’ on the path which was still warm! I know this sounds crazy but we really wanted to see one!

From the mountains, we headed to the water and went Oyster farming on the Chesapeake Bay with the cool guys from Rappahannock Oyster Company. We went out on the water and pulled up the oyster cages and we actually ate oysters right out of the water – they were that good! We then had dinner at their waterfront restaurant and enjoyed more fresh seafood and our last night together.

Our final stop was Historic Tredegar in Richmond which was an iron works during the Civil War and which now has an interactive museum for visitors explaining all about the war which shaped American history.

Now we’re back the editing on these videos has started and I can’t wait to show you them! Stay tuned…