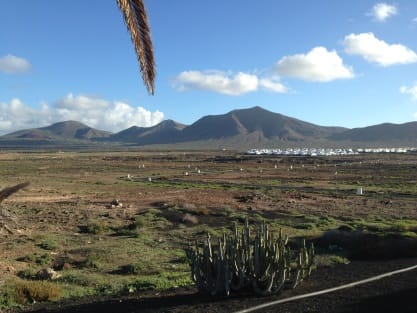 So it finally feels a lot more like winter: snow, rain and dreaded minus temperatures causing chaos! It is all making me hugely miss the sunshine and my last holiday where I sunned myself in Playa Blanca, Lanzarote.

A few years ago I worked a season there and now have a soft spot for the island despite its ‘Lanza-grotty’ nickname.  Yes, it is very brown but it is dotted with bodegas (wineries, my favourite!) and palm trees, and the scenery is amazing.  It is not often you are surrounded by volcanoes or an old lava field, under a clear blue sky in December.  Although I must confess as much as I love exploring this holiday was dominated by time spent lying by the pool, soaking up as many rays as humanly possible, whilst sipping on sugary cocktails.

Nevertheless, as it was December, there were a few cloudy days which encouraged us to either eat or explore.  One morning we stretched our legs by climbing Montana Roja, a volcano at the western end of town and were rewarded with some great views looking out to the white sand dunes on the next island, Tenerife.

We hired a car for the duration and spent a whole overcast day exploring the island.  Timanfaya National Park is a concentration of volcanoes and we spent the morning here on a coach winding through the Martian lookalike landscape, and watched the heat of the volcano barbecue food on an open grill, showing the intense temperature just below your feet.

We headed on through the old capital of Teguise, with traditional white-brick buildings and sweet little side streets where we stopped for a coffee.  After driving through many small mountain villages we reached Mirador del Rio, one of the highest points on the island with dizzying views over La Graciosa, a small island just off of the coastline, and then dropped back down to the east coast to Jameos del Agua.  This was my favourite visit: a lava cave created naturally but decorated by César Manrique, a famous architect born on the island.  We descended towards a clear pool and looked into the water to see hundreds of small, luminous creatures.  We discovered that this is the only place in the world to see ‘Jameitos’, a species of small, blind, albino crabs!

It was a long day but worth seeing a different side to the island which made me strangely grateful for a cloudy day… but I still prefer the sun, so kindly go away winter.