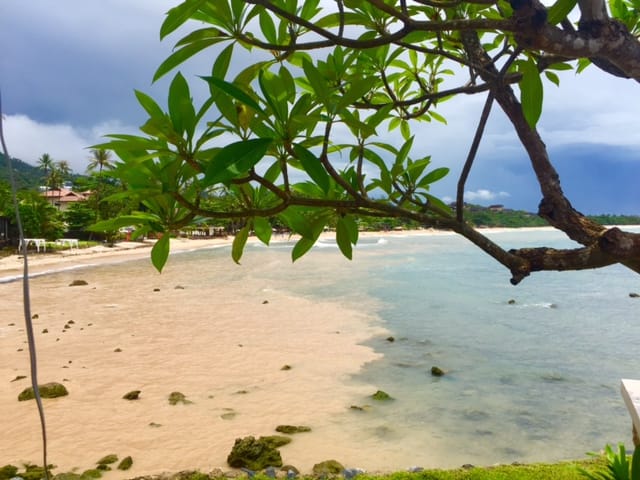 Having sold and promoted the USA and Canada for the last 30 years, I have to confess to being a tad obsessed with all things North American and, unlike many travel industry friends, I have never felt a strong urge to head East! However, with my eldest daughter based in south east Asia for 6 months as part of a Marine Biology internship, I decided that now was the time to venture out of my sugar doughnut coated comfort zone and meet up with her in Thailand. Not exactly that adventurous for many but this was quite a big deal for this very Western girl!

Despite my eldest daughter trying to persuade me to join her on some hill tribe trekking adventure (does she even know me?!), I chose our destination carefully as I generally prefer to rest my head on an actual pillow at night and not on some ground mat or mosquito infested hammock! So off we went – my youngest daughter Lucy (18) was keen to join me on this adventure and we flew with Malaysian to Kuala Lumpur and then on to Koh Samui.

I had heard that the airport in Koh Samui had been called one of the most ‘beautiful in the world’ and at first glance it was like arriving into a tropical garden centre! It has an open structure and is actually true to the brochure description in that it’s ‘very in tune with its natural surroundings’. Immigration consisted of 3 wooden huts and it only took around 20 mins to be out the other side..slightly different to some of my experiences elsewhere. Being a Brit though my inner voice was tutting in a ‘this is all very nice but where is the security?’ kind of way!

We had arranged an airport transfer and the first thing that hit me about the thirty minute drive from the airport to The Sarann (our hotel) was the somewhat shanty towns and chaotic road system! Dogs, cars, mopeds and tourists all roaming the streets without any kind of order amidst street food stalls fighting for attention! Helmets were obviously not the order of the day and massive power lines seemed held together precariously looping down over my head. My over active imagination immediately led me to a scenario where one might just disconnect, snake down and ‘get me’ like some scene in a ‘Final Destination’ movie! Despite this, we arrived in to a very calm and welcoming hotel with the staff greeting us with a drink as soon as we stepped out of the car and leading us to the front desk to check in. There were smiles all round and the constant bowing from the staff was another shock to my westernised system! There was no ‘computer said no’ attitude in sight and I can genuinely say that it was a very happy place to be!

Our Jacuzzi Suite Villa with its own private deck and outdoor hot tub did not disappoint and with it costing us under £80 per villa per night, I couldn’t help but think back to many an inner city Premier Inn that had cost me the same in far less pleasant surroundings! This included a wonderful breakfast (no dehydrated baked beans in sight) overlooking the stunning turquoise waters and white sand of Bophut beach each morning. Might sound cheesy but I felt blessed to be starting each morning of our holiday with that view! Our first night’s foray to find dinner led us to a beachfront restaurant where we had a two course feast with cocktails for under £10 per person. The value for money really did hit me and I can now see why Thailand attracts so many Brits used to paying the same for popcorn and a diet coke at their local cinema!

Although, we obviously wanted to lap up the local beach and infinity pool, we knew that we also wanted to explore the island’s attractions without falling into the trap of supporting a zoo or animal attraction where elephants and tigers might be living in undesirable surroundings. We therefore booked a Jungle Safari Jeep tour at the attractions desk in our hotel and it didn’t disappoint. For the equivalent of £35 per person, we were collected from our hotel for a 6 hour day trip and a chance to see most of Koh Samui’s best attractions including the Grandmother and GrandFather Rocks, Big Buddha, the Mummified Monk (!), Namuang Waterfall, Buddha’s Magic Garden and a traditional Thai lunch at a mountain top restaurant. I have to say that this was a real 4×4 experience and travel by these rather rickety jeeps is not for the faint hearted. There were times where the words ‘are we there yet?’ rang through my head as I felt like I had opted for some kind of jungle workout! However, it was one of the best hot and dusty experiences I have ever had and the precarious roads and potholes just added to my daughters’ enjoyment as they both decided to sit on the top of the jeep and battle with the low lying vegetation!

After the 4×4 tour we decided to take it easy for a couple of days, enjoy a Thai massage (equivalent of £6 for one hour!) and relax at the beach. We used the courtesy shuttle from our hotel into Chaiweng several times as it was cheaper and quite entertaining to eat there in the evenings. Chaiweng is a bustling, commercialised town and I was pleased that I had done my Trip Advisor research and not actually stayed there but it was good spot for a bit of Thai craziness and a variety of restaurants.  The little pancake stalls selling fresh pancakes for the equivalent of £1 were a hit with all of us and we had some really amazing Thai food for less than a McDonalds which incidentally you can get there too of course!

Towards the end of our trip, we booked an all-day tour of Anthong Marine National Park by speedboat. This was easily one of the most beautiful places I have EVER visited ANYWHERE!  We were collected around 8 a.m. from our hotel and taken to the port to join our guide and a group of approximately 15 others. The scenery in this archipelago of 42 islands in the Gulf of Thailand with towering limestone mountains is absolutely breathtaking!

First stop was a kayak tour and I knew that my daughters would be working out how they could ditch me at the first opportunity so that they didn’t have to cope with my seriously lacking kayaking skills! Their disappointment was evident when our lovely guide eagerly passed a 3 man kayak to us so that we were forced to be in the same vessel! Thankfully, I obviously had hidden strengths and we all survived – it wasn’t exactly difficult navigating the smooth turquoise waters in what reminded me of a scene from Jurassic Park minus the dinosaurs with its stunning scenery and islands (just can’t shake those American movies out of my head!). Kayaking was followed by a Thai lunch in paradise and 3 further stops where we could swim, snorkel and hike – yes you guessed it – I laid under the palm trees whilst others hiked!

And so ends my first blog – my first experience of Asia certainly won’t be my last!