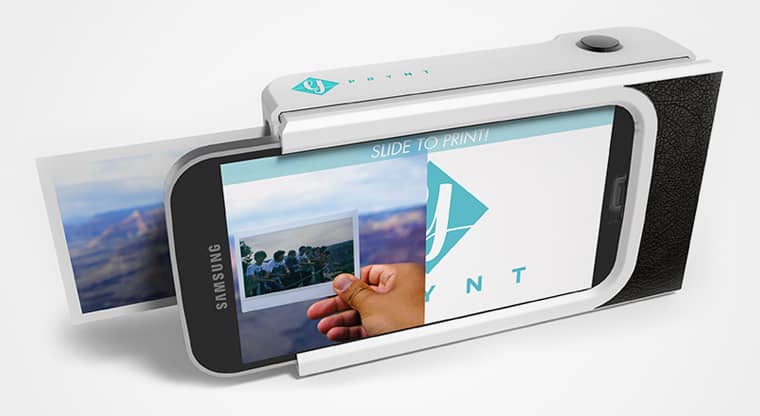 For more travel and technology news, visit springwise.com
View original springwise article
In 2008, Polaroid announced that it was to shut down all manufacture of its instant film, shutting down 3 factories and citing continuing drops in sales for physical film. Nostalgia is a powerful thing, however, and group of Dutch creatives are already using Polaroid’s machines to bring the film back through the Impossible Project. In more recent years, platforms such as Instagram have popularized photography again, and we’ve even seen ideas such as Instaprint print out real-time photo feeds as physical photographs. Now Prynt is a smartphone case that lets users turn any digital snap into a physical copy in under a minute.

Hailing from France, the startup has created a case that simply snaps onto an iPhone 6 or Android device with a 4.7-inch screen. Currently still in its prototype phase, the idea is that users select the photo they want to print from their phone — whether it’s just been taken or an old one they want to keep — and instantly print it. The case connects to the phone via Bluetooth and prints by heating ink-filled paper loaded into it. At the moment, it takes around 50 seconds to print but the team hope to add a Lightning connector for Apple devices to bring this time down to 30 seconds. It will also eventually be able to hold between 10 and 30 pieces of photographic film.

Although the bulkiness of the case and the printing capabilities make it feel like an old piece of tech, Prynt has also incorporated an augmented reality element to each print. When taking a photo through the Prynt app, a small video clip is filmed at the same time and uploaded to the cloud. Anyone can then hold the physical photo in front of their smartphone camera and view the video using AR, much like a tangible Snapchat.

The Prynt team aim to launch the product on Kickstarter in the coming months, at a price of USD 99. Are there other ways to satisfy consumer desire for digital experiences they can touch?