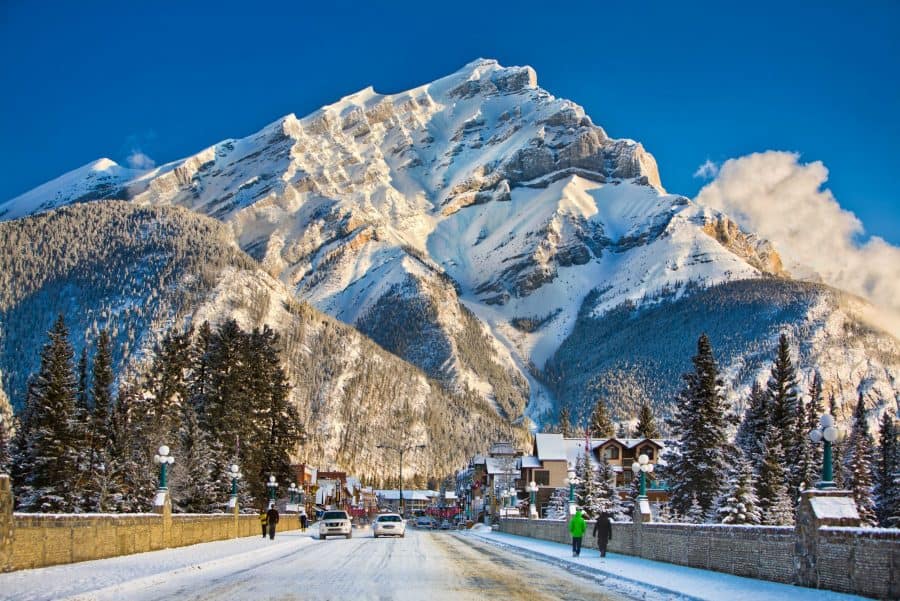 Banff, Alberta Recognised as Best of the World Destination in 2017 by National Geographic Traveller

21 November, 2016: Banff, Alberta has been named to National Geographic Traveller magazine’s Best of the World list which highlights 21 must-see places to visit in 2017. Announced Thursday, 17 November, Banff is the only Canadian destination named to the list and is on the magazine’s cover with a photo of the iconic glacial-fed Moraine Lake situated in the Valley of the Ten Peaks within Banff National Park.

The 21 destinations were chosen by Traveller editors. The full list can be found in the December/January 2017 issue of National Geographic Traveller magazine, available on newsstands starting 29 November, and online now at NatGeoTravel.com/BestTrips2017.

“It’s no secret that 2017 marks Canada’s sesquicentennial celebration of cool. But we love Canada for little reasons as much as landmarks and milestones. So our story is about how an outward journey to Banff leads to an inner sense of happiness. The magic comes from person-to-person interactions with big-hearted Canadians, from First Nations community leaders to horse-packing cowboy guides to park rangers to some of the country’s newer citizens, who hail from foreign lands but find a happy home in Canada. We aimed to honor the inclusive feeling of Canada, a warm embrace that brings a human-scale equivalent to those majestic landscapes,” said George Stone, National Geographic Traveller editor-in-chief.

“I am thrilled Banff, Alberta has been named to National Geographic Traveller’s Best of the World list,” said Ricardo Miranda, Minister of Alberta Culture and Tourism. “This is a prestigious honour and we could not be more thrilled with the recognition of our province. Alberta is a place of incredible scenery, people and spirit. We wholeheartedly agree that Banff is one of the world’s must see destinations. It is one of many locations in the Rocky Mountains and Alberta that offers visitors a great vacation experience. Congratulations and well done, Banff and Alberta!”

“This is amazing recognition for Banff, Alberta and Canada. The Canadian Rockies are an iconic, breathtaking destination that offers travellers truly spectacular moments,” says Royce Chwin, CEO of Travel Alberta. “We couldn’t be more proud to be part of National Geographic Traveller’s prestigious list, especially heading into Canada’s 150th anniversary.”

“We are excited to share our destination with the world and are proud to be recognised by National Geographic Traveller as a place you need to visit in 2017,” said Leslie Bruce, President and CEO of Banff & Lake Louise Tourism. “We hope that visitors will come and enjoy the array of incredible experiences in Banff National Park all year long. Each season brings a unique range of activities and breathtaking scenes.”

“Parks Canada is a leader in natural and cultural tourism and we are all very proud of this recognition. Banff National Park is the birthplace of Canada’s national park system and an exciting four season destination. In 2017, for Canada’s 150th anniversary, admission to all national parks will be free and I encourage all visitors to discover what makes each of Canada’s 46 national parks unique and among some of the best destinations to visit in the world,” said Catherine McKenna, Minister of Environment and Climate Change and Minister responsible for Parks Canada.

National Geographic Traveller (six issues per year) is the world’s most widely read travel magazine and has 16 international editions. The National Geographic Travel Digital Group shares its inspiring and authoritative digital content, such as trip ideas, photo galleries, blogs and apps with its @NatGeoTravel community of over 20 million. To learn more about each destination visit: NatGeoTravel.com/BestTrips2017

About Banff National Park
Banff National Park is Canada’s first national park, founded in 1885, and is renowned for its Rocky Mountain beauty, wildlife and recreational activities. To ensure this is a place where nature flourishes and evolves for all time, Parks Canada strives to protect the region’s wildlife and environment for the enjoyment of future generations. The mountain town of Banff and hamlet of Lake Louise are revered by skiers, snowboarders, campers, hikers and nature lovers around the world. Authentic Canadian cuisine is met with mountain inspired wellness and accessible adventure, making it an attractive destination all year round. Much like its neighbouring destinations in Canada, Banff and Lake Louise are diverse, accepting and awe-inspiring in their own right. No matter what season, skill level, or age, Banff National Park is a place that can be enjoyed by all. For more information about Banff Lake Louise and Banff National Park visit www.banfflakelouise.com and find us on YouTube, Facebook, Instagram and Twitter

About Alberta Canada
Located in the heart of Western Canada, bordered by the Canadian Rocky Mountains to the west and prairies to the east, the province of Alberta is undoubtedly one of the most beautiful places on earth. The picturesque mountain towns of Banff, Lake Louise, Canmore and Jasper are revered by skiers, snowboarders, hikers and outdoor enthusiasts for their awe-inspiring terrain, jaw dropping vistas and abundant wildlife. From exploring Calgary and Edmonton, lively cities brimming with music, culture and nightlife, to discovering dinosaur fossils in the mysterious Canadian Badlands, visiting Alberta promises to be an experience unlike any other. For more information visit www.travelalberta.com and find us on YouTube, Facebook, Instagram and Twitter