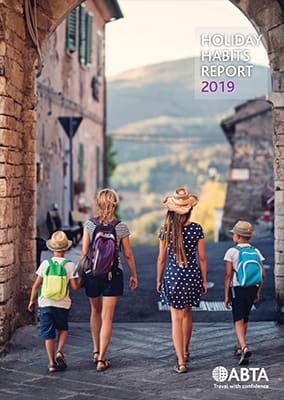 I’ve been trawling through the latest Holiday Habits report from ABTA this morning and here are my key takeaways:

The good news for the industry is that “the research shows that Britons remain firmly committed to taking their holidays.” This is not a new trend, but comforting for the industry to know that even in times of political or economic uncertainty, or both, a holiday remains a top priority. The new car or the latest TV can wait, but the holiday is going to happen.

Holiday spend, the report highlights has however dropped in the past two years. I wouldn’t read too much into this at this point. During this period we have seen a resurgence of travel to countries such as Turkey and Egypt, which are traditionally cheaper than most of the popular western Mediterranean destinations. These areas also promote a high level of All-Inclusive options which are often popular with budget conscious travellers. It’s not necessarily that the consumer has less money to spend, more that they can find a holiday to suit them for a lower price than their previous trip.

It has been another positive year for the package holiday, according to the report. Michael O’Leary might disagree, but the package holiday is far from dead. In fact, it just continues to evolve. Back in the charter led days of the 1980’s the consumer was still tied to either a 7 or 14 night duration. The 1990’s saw the 10 and 11-night option creep in and since the turn of the century, with the rise of the low-cost (sic) airlines, package holidays can now offer the utmost flexibility and remain the first choice option for many consumers.

Responsible tourism has been increasing in the public consciousness in recent years, and whilst the impact of flying was at the bottom of the list of eleven concerns asked about in the report, the subject is getting a lot of press coverage. As people are encouraged to fly less, we believe it will be the additional breaks which will decline, rather than the main annual holiday. This is supported somewhat in the report with 4% fewer people planning to take a city break next year than took one in 2019.

Overall, despite challenges such as the tragic demise of Thomas Cook, the UK travel industry is a resilient beast and the consumer’s intention to travel, despite all the current political shambles, remains undeterred.